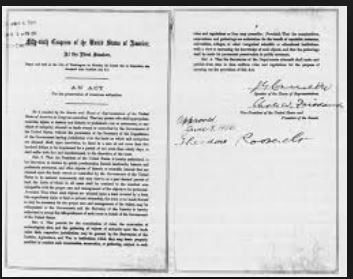 You will complete a four part exercise and build an augment for or against the case of President Trump's application of the Antiquities Act of 1906 in dramatically modifying national monuments.

Sec. 2. That the President of the United States is hereby authorized, in his discretion, to declare by public proclamation historic landmarks, historic and prehistoric structures, and other objects of historic or scientific interest that are situated upon the lands owned or controlled by the Government of the United States to be national monuments, and may reserve as a part thereof parcels of land, the limits of which in all cases shall be confined to the smallest area compatible with proper care and management of the objects to be protected: Provided, That when such objects are situated upon a tract covered by a bona fied [sic] unperfected claim or held in private ownership, the tract, or so much thereof as may be necessary for the proper care and management of the object, may be relinquished to the Government, and the Secretary of the Interior is hereby authorized to accept the relinquishment of such tracts in behalf of the Government of the United States.

Review of the Process:
Next, you will watch a clip from C-SPAN and answer the following questions. (see side column)

Presidential Proclamations:
Read the proclamations from President Obama and President Trump. Make a Venn Diagram depicting how the presidents differ/agree in their viewpoints concerning Bears Ears and its protection as a national monument?

Legal Debate:
Lastly, you will justify whether or not Bears Ears was legally created under President Obama. You will also justify whether or not President Trump was in violation of the Antiquities Act when Bears Ears was rescinded/reduced by establishing the Indian Creek and Shash Jaa units. Fully justify your case based on textual evidence gathered.